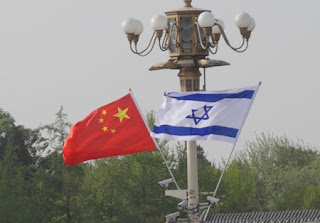 The flags of China and Israel. (Photo/CFP)


Israel is seeking opportunities to export its technology, and China, with its abundant capital and hunger for innovative technology, has become a prime choice for setting up partnerships, Shanghai-based China Business News reports citing Israeli investment consultants.

"From the views of enterprises, compared with Europe and the United States, we prefer to collaborate with Asian nations, particularly China, given the good historic and cultural relations between Israel and China," said Uri Kushnir, a managing partner at Israeli technology transfer company 31 Degrees North Innovation Exchange.

Kushnir and his partner Guy Pross arrived in China in late May and signed a strategic partnership agreement in Shanghai with Gao Feng Advisory Company, a China-based international consultancy firm.

Israel and the United States have maintained close ties, but the Israeli government began developing an interest in Chinese firms and the Chinese market in recent years.

China is expected to surpass the United States as the largest overseas participant in the Israeli government's development projects in the next two years, said Avi Luvton, executive director of the Asia Pacific Department at the Israeli Industry Center for Research and Development.

According to Israeli government statistics, technology transfer deals made by companies of the two countries were estimated to have reached US$300 million in 2014, up from US$50 million in 2013.

The two countries have differences, however, including their motivation in pursuing technological innovation, Kushnir said.

Israel's pursuit of innovation has been driven mainly by its limited resources and the pressure on the country for survival.

China is a large country with abundant resources and a massive market that has pursued innovation because of its desire for success and the need to improve its people's livelihood, Kushnir said.


Click here to read the original article
Posted by Synergistics Limited at 19:14