An analyst says the duties are meant to keep imports of “posh” Western vehicles at bay while China moves beyond small-car production and develops midsize and large cars.

A new trade dispute at the World Trade Organization between the U.S. and China over protective duties could foreshadow a battle in a long war for supremacy in global auto markets, an industry expert says.
Peter Cooke, a professor of automotive management at the University of Buckingham in the U.K., discusses the scenario after the WTO’s disputes-settlement body established a panel to adjudicate claims China is imposing illegal duties on U.S. vehicles exported to the country.
Cooke predicts a tough fight from Beijing to maintain the duties, which he characterizes as both punishing and strategic.
According to the U.S. Trade Representative (USTR) office, the Chinese government in December 2011 issued both anti-dumping and countervailing tariffs on U.S.-built cars and SUVs with engine capacity of 2.5L or larger.
The USTR reports the anti-dumping duties are 21.5%, with lower rates for selected car companies ranging from 2% to 8.9%, and countervailing tariffs of 12.9%, with lower rates from between 6.2% and 12.9%. These are paid on top of China’s existing 25% duties on U.S. auto imports.
Cooke tells WardsAuto.com China is playing a “long game” with the aim of giving its auto sector time to develop midsize- and large-car capacity, building from its existing strength in the small- and budget-car sector.
“This is part of the new protectionism” spurred by China’s assessment of its local market, he says.
“Driving largely Western cars cannot be good for the pride of China – what about their own domestic brands?” the analyst says. In a market in which “posh” cars are imported, “the buyers love it, but if you are the government, you won’t.”
Chinese leaders “are flexing their industrial muscles, and they are looking at what is one of the most profitable sectors of the market and (saying), ‘We want some of that.’”
The analyst adds that China’s recent economic slowdown likely will make Beijing’s newly appointed political leaders more aggressive in fighting the WTO case.
The duties China is defending are intended to compensate domestic auto makers for alleged U.S. government subsidies to American car companies, and to punish those manufacturers for alleged dumping in China – selling at reduced prices cars that are more expensive at home.
Both practices could violate WTO rules. The panel will decide whether China’s claims are valid and, if so, whether they are in fact illegal.
The U.S. government is confident it will win the case. American diplomats fired a broadside at their Chinese counterparts during an Oct. 22 meeting in Geneva of the WTO dispute-settlement body that formed the panel to judge the countries’ conflicting claims.
Noting attempts to resolve the dispute through negotiations held with China since July have been unsuccessful, a U.S. statement claims China has “breached a number of its obligations under the (WTO) General Agreement on Tariffs and Trade, the antidumping agreement and the subsidies agreement.”
Several Chinese auto analysts contacted by WardsAuto suggest the U.S. move against China’s measures was timed to make President Obama appear tough on China during the run-up to his re-election.
They also suggest China’s tough stance at least is partly motivated by wanting to counter U.S. complaints to the WTO about Chinese promotion of exports such as clothing. The U.S. already has raised concerns about Chinese tire-import controls.
China’s higher duties are a way of “rattling the saber” over sales of U.S.-built SUVs in the country, says Bill Russo, senior adviser at global consulting firm Booz & Company’s Beijing office.
The tariffs “generally do not have a widespread impact for manufacturers who have production capacity to make cars in China,” he says. The effect is greater on “those who are importing vehicles…This may selectively target car makers like Chrysler who no longer produce vehicles in China.”
Russo also says the levies may be meant to “weaken premium brands of General Motorsand Ford (Cadillac and Lincoln, respectively) which are exported to China.”
While GM stands to gain if the WTO panel rules against China, the auto maker already has been prospering from its manufacturing operations in the country.
According to the China Association of Automobile Manufacturers, GM says imported vehicles account for less than 0.5% of its Chinese sales.
Other U.S. auto makers also could benefit if America prevails in the tariff dispute and ultimately convinces China that freer trade is in everyone’s interests, predicts Tomas Hult, director of the International Business Center at Michigan State University.
He argues if China abolished its existing duties and harmonized its tariffs with the U.S. at 2.5%, then GM alone could sell 9 million cars a year in China, up from 2.5 million today.
“With the exception of the last year, the Chinese auto market has grown tremendously in the last decade, mainly due to the population growth of China’s middle class,” he says.
– with Leah Germain and Mark Gao in Beijing

Posted by Synergistics Limited at 20:15 No comments: 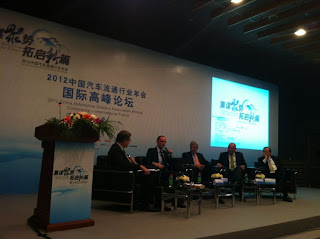