The car sharing app Uber is under pressure in Europe, with thousands of taxi drivers saying the service threatens their livelihood.  But in China, Uber has stayed under the radar, and as Bloomberg's Stephen Engle reports, its's becoming a valuable option.  (Source:  Bloomberg)

Click here to view this story at bloomberg.com
Posted by Synergistics Limited at 01:05 No comments: 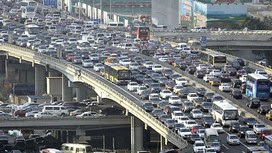 China is conducting a review of potentially anti-competitive behaviour in the world’s largest car market, the commerce ministry said on Tuesday, as new sales data showed that foreign brands were continuing to acquire market share at the expense of their struggling domestic rivals.

Qiu Zhongyi, a ministry official, confirmed that Beijing had asked industry associations in a range of sectors to share information on problems ranging from monopoly practices to local protectionism. “We want to understand the challenges they are facing,” he said, adding that the review covered dozens of industries including cars, pharmaceuticals and alcohol.

The survey document, circulated late last month, said the reviews were being conducted in accordance with the Chinese Communist party’s pledge in November to ensure that market forces would play a “decisive” role in the economy.

May vehicle sales increased 8.5 per cent year on year to 1.9m units, according to the China Association of Automobile Manufacturers, a domestic lobby group. “If the economy is slowing down, there’s no evidence of that in the auto industry,” said Bill Russo at automotive consultancy Synergistics.

But sales of Chinese brand vehicles again trailed the wider market, growing just 5.4 per cent. “Competition between Chinese brands and foreign brands, and among foreign brands themselves, is intensifying,” Yao Jie, CAAM deputy secretary-general, said at the association’s monthly briefing.

Cars produced by foreign-invested joint ventures dominate the market. While the JVs have proven lucrative for both multinational car companies and their state-owned partners, the latter have failed to develop their own brand products.

The three most popular cars in China are Ford’s Focus and Volkswagen’s Santana and Lavida sedans. Sales of these three models alone exceeded 500,000 units in the first five months of this year. For all of 2013, by contrast, China’s most popular domestic brands, BYD and Chang’an, each sold 500,000 units.

“Continued expansion of the middle-class population is raising the number of potential buyers and foreign brands are building out their distribution networks in lower tier cities,” Mr Russo said. “From a market share perspective there’s no good news for the local brands.”

Even Hebei-based Great Wall Motor, which manufactures China’s best-selling SUV, has recently suffered heavy sales declines in part because of quality issues that have delayed the launch of its latest Haval model.

In an attempt to halt the decline of local brands, CAAM has opposed moves to lift the 50 per cent foreign-ownership cap in China’s auto sector and is urging multinational carmakers to transfer more technology and R&D capabilities to their local joint ventures.

Some foreign car companies have also been criticised for the high prices of their vehicles in China relative to other markets, although they insist this is because of strong demand and import tariffs rather than any anti-competitive practices.

Click here to read this article at FT.com
Posted by Synergistics Limited at 01:59 No comments:

Despite being based in one of the world's biggest and most polluted car markets, Chinese electric-car maker BYD Co. until recently sold few of its hybrid or battery-powered electric cars outside of its home province of Guangdong, thanks to a system of local subsidies.

Those rules are now changing under a new effort by China's central government to push local authorities to treat equally all Chinese car makers when granting green subsidies. This year for the first time, big cities are relaxing subsidy rules that effectively prevented sales of electric and hybrid cars by local manufacturers that weren't based in their jurisdictions.

Such restrictions had been a drag on green-car sales in China, particularly for BYD, a midsize manufacturer of cars, buses and batteries. In 2008, BYD became the first Chinese auto maker to produce electric cars, a move that helped attract a $232 million investment from Warren Buffett's Berkshire Hathaway Inc.

This year "is an inflection point for China's electric-car industry," Li Yunfei, BYD's domestic sales executive, said in an interview. "We expect China's electric car sales will continue to record strong growth rates in the next few years," he said, without providing details.

BYD in March said it hoped to sell 20,000 electric vehicles in 2014, a big increase from some 2,000 sold last year. Mr. Li said sales in Beijing and Shanghai, one of the first cities to loosen regulations, have already helped push sales of BYD plug-in hybrid passenger cars to 3,294 in the first four months of this year, with 8,000 more on order. Plug-in hybrids are cars that can run on either gasoline or battery-power.

BYD's change of tone reflects a broader policy shift in China, as the country's leaders make a renewed push to stimulate demand for green cars in a bid to combat pollution and curb rising oil dependence. The nation has set for itself the ambitious goal of putting 500,000 plug-in hybrid and electric vehicles on the road by next year, and five million by 2020.

One example of the shift is the central government's recent push to have provincial governments extend subsidies for electric and hybrid cars to makers based outside, as well as inside, their regions. Such subsidies are vital because they make pricey green-cars affordable. When combined with national subsidies, they can cover around one-third of the cost of a car. BYD's flagship e6 electric car sells for around 380,000 yuan ($60,800) without subsidies. Foreign electric-car makers have limited benefits: Shanghai, for instance, pledged to offer 3,000 license plates free to buyers of imported electric vehicles.
The governments of Beijing and Shanghai started offering subsidies for BYD green cars in recent months, and other major cities are expected to follow suit later this year. Other cities plan to build charging stations so electric car owners won't worry about being stranded away from home.

Plenty of hurdles remain. BYD's Qin hybrid car gets 70 kilometers, or 43 miles, on a single charge compared with 121 kilometers, or 75 miles, in a Nissan Leaf. BYD also is still heavily dependent on sales of traditional gasoline cars, and those are declining as more Chinese consumers flee to higher-quality foreign brands. BYD's first-quarter net profit plunged nearly 90% versus the previous period, to 12 million yuan.
At the Chongqing auto show on Friday, hundreds of would-be car buyers milled around the stands of foreign auto makers such as Volkswagen AG, while visitors to BYD's stand were noticeably fewer.

"How do you finance all these new technologies when you're not making money in your core business right now?" wonders Janet Lewis, an analyst at brokerage Macquarie Group who estimates that electric and hybrid cars accounted for only 3% of BYD's car shipments in the first four months this year.

The charging infrastructure for electric cars remains minimal in China, discouraging buyers. Once green-car demand does pick up, the chief beneficiaries may be foreign manufacturers like Nissan Motor Co., which have more-established electric-car businesses. Nissan later this year will produce electric vehicles for the Chinese market through a joint venture with Wuhan-based Dongfeng Motor Group, making it eligible for local subsidies as well. BMW AG and Tesla Motors Inc. also are making a green-car push in China.

"BYD isn't as well established a brand as a manufacturer like Nissan," said Bill Russo, president of Synergistics Ltd., an automotive-focused consultancy. "It will take BYD time to create trust in the marketplace to allow them to sell in significant numbers.

Mr. Li shrugged off potential competition, saying moves by others to ramp up electric-car sales in China will boost interest in green-cars overall. "It isn't a time to compete with each other," he said. "It's a time to develop a bigger market and create economies of scale."

Mike Ramsey contributed to this article.

Write to Joanne Chiu at joanne.chiu@wsj.com and Colum Murphy at colum.murphy@wsj.com

Click here to read the original article at marketwatch.com
Posted by Synergistics Limited at 22:19 No comments: