Presentation on China and its implications for the global economy to be delivered to students and representatives of the EMBA program at the Peninsula Hotel in Beijing.
Posted by Synergistics Limited at 18:17 1 comment:

An Odd Corporate Vehicle for Doing Business in China

Buick Riviera The big attraction on GM’s stand at last month’s auto show in Shanghai, the concept car is the product of a joint venture between Shanghai GM and a separate JV, the Pan Asia Technical Automative Center

In 2010, seven managers from PSA Peugeot Citroën and five from Chang’an Automobile met in Shenzhen, southern China, to lay the groundwork for a new car factory. Three years later, Capsa, a 50-50 joint venture between the French and Chinese companies, is in the final stages of preparing a 1m square metre plant for the September launch of Chinese-made premium cars under the DS brand. “Because we were beginning from a blank sheet, people wanted to make it as perfect as possible,” says Gilles Boussac, Capsa’s president, between meetings with his team of mostly Chinese managers. “So often in China, if you’re trying to rework or improve something, it takes years to achieve.”

But the people who built Capsa have not started from scratch. Their shared enterprise is based on three decades of global car companies’ experience working with Chinese partners.
International car executives are confident such ventures will continue to be the best way to reach Chinese customers, who now buy more than 20m new vehicles annually, making it the world’s largest automobile market. But their enthusiasm for these awkward corporate vehicles, with their unique management challenges, obscures the fact that the path of co-operation has been bumpy.

From the outset in the 1980s, automotive joint ventures in China were built on hopes of mutual benefit, tinged with mutual suspicion. George Xue of Fudan University’s school of management in Shanghai says they are “central [to] the Chinese economy”. The nation had three main aims in encouraging them: “Developing industry, upgrading technical expertise and enhancing our management level.” International carmakers, meanwhile, were prepared to share their manufacturing technology and knowhow with Chinese state-owned partners in the hope of gaining access, initially via local government contracts, to the wider market.

The joint ventures are odd creations. The largest state-owned carmakers frequently cultivate relationships with non-Chinese rivals. SAIC Motor in Shanghai, for instance, operates 104 joint ventures, including two of the biggest – one with Volkswagen and another with General Motors – as well as its own independent carmaking operations. But these enterprises now have deep roots. Ahead of the auto show in Shanghai last month, Volkswagen celebrated with SAIC the 30th anniversary of the first Chinese-built VW Santana.

From China’s point of view, local production was revolutionised by association with the global companies. The Chinese partners grew large on the back of joint-venture production. At a roundtable at the Boao Forum for Asia last month, Hu Maoyuan, SAIC’s chairman, attributed its “development into a Fortune Global 500 company from a local small company” to the opening of the economy and opportunity to co-operate with global carmakers. The Chinese also appear to value management experience acquired via joint ventures: Mr Hu and his vice-chairman are former presidents of Shanghai GM.

Meanwhile, mutual suspicion has waned. According to G.E. Anderson’s book Designated Drivers, Peugeot’s first, failed venture, with Guangzhou Automotive Manufacturing in the 1980s, was marked by “resentment that, although the Chinese workers were being taught to speak French, there appeared to be no desire on the part of the French expatriates to learn Chinese”. The Chinese also bridled at strict French production methods, while the French did not export the Chinese-made Peugeots, as planned, lest the poor quality hurt their brand. By contrast, Capsa’s managers use English and Chinese – based in part on the fact it is easier to find Chinese-English interpreters.

Capsa’s Shenzhen plant is hard to distinguish from European or US car factories, though managers boast it is more compact, and therefore likely to be easier to run. It draws on lean manufacturing techniques, such as the use of modular plastic racks and trolleys along the production line. In a negotiation typical of Chinese joint ventures, the French team had to convince its Chinese counterparts such racks would be a better investment than cheaper, but rigid, metal alternatives. To pre-empt potential clashes, Capsa workers were asked to bring their tools to the first training sessions to help integrate their working methods into the planning of the plant.

Ying Zhanwang, executive vice-president, says the joint venture has developed a “one goal, one team, one process” system of production-line excellence based on best practice at Chang’an and Peugeot. It also capitalises on Chang’an managers’ and engineers’ experience working with Mazda and Ford in other joint ventures.

Shanghai GM is the longest-running example of this co-operative approach. In American Wheels, Chinese Roads, Michael Dunne writes about the critical moment, in 1998, when Phil Murtaugh, then general manager of GM’s Shanghai operations, and Mr Hu, at the time his Saic counterpart, laid out a four-point plan for a “kind of co-operation never before witnessed in China’s automotive industry”. It included the requirement that Shanghai GM staff should put the joint venture first, in contrast to the more rigid delineation between German and Chinese managers at rival Shanghai VW.

Kevin Wale, former president of GM China, says all joint ventures are moving towards Shanghai GM’s co-operative style. VW and SAIC set great store, for instance, on forging a closer common culture through initiatives such as Shanghai Volkswagen University, set up last year to train staff in areas such as product development and sales and marketing.

Mr Wale and other analysts also say there is no reason why Shanghai GM’s approach should be more successful than Shanghai VW’s and point out that relations within the GM-SAIC venture are not always harmonious.

Bob Socia, Mr Wale’s successor, says the expatriate roles at Chinese joint ventures are “not easy jobs, because you have lots of bosses”. Trying to look at problems from your partner’s perspective can be draining, Mr Wale adds: “It isn’t a natural phenomenon to always be looking behind the curtain.” As an example, both point to Saic’s insistence on – and GM’s initial resistance to – development of the Chevrolet Sail at a production cost and price level far lower than the Americans were used to.

Since the 1980s, automotive companies have learnt how to tailor old models, and, increasingly, to design new cars to Chinese tastes. Asked what the Chinese have taught them, most expatriate managers refer to their counterparts’ determination to reduce process complexity and costs.

But have the international carmakers applied these lessons or other Chinese-led innovations to their operations in other markets? “Less than they could or should have done,” says Bill Russo, a former Chrysler executive whose Synergistics consultancy now advises companies on building cross-border partnerships.

All joint ventures are “like children growing up”, says Mr Wale. The parents have “to let them stretch where they are capable and slow them down where they need guidance and support”. The children, and their parents, are likely to face further challenges in the coming decade. John Huang, managing partner at Shanghai law firm MWE China, points out: “If competitors form joint ventures – what I call ‘sharing the same bed, with different dreams’ – sooner or later they will have problems.”

In three areas – development of Chinese-branded cars, the export of Chinese-made vehicles and the sharing of intellectual property – Chinese companies, and their political paymasters, have not achieved what they hoped for in the 1980s.

The arrangements were supposed to prompt the development of competitive homegrown models. At the Shanghai show, scores of Chinese brands were on display but non-Chinese marques have the upper hand in the market. This is partly because the Chinese are happy to reap the monetary and industrial rewards from the joint ventures, but also because the Chinese consumer has developed a taste for the international brands.

SAIC’s Mr Hu underlined at the Boao conference that the company was “working on independent research and development . . . and our independent brands are seeing long-term development, not only in terms of the technology level”. He admitted, however, it would require “the efforts of generations” for sales of Chinese-branded petrol and diesel vehicles to surpass those of joint-venture brands.

The original joint-venture contracts also made clear that the new enterprises would eventually export their vehicles from China. But one analyst says international companies have deliberately “slow-walked” exports because they could pose a direct competitive threat to their wholly owned subsidiaries in third countries.

At the same time, with a few exceptions – including the Sail, whose intellectual property belongs to GM’s local joint ventures – international companies have been reluctant to share designs with Chinese partners. Most “new” co-owned joint-venture brands are pale versions of older models.

Chinese and foreign partners have a strong shared interest in prolonging their moneymaking ventures. But if China slows, or local brands fail, the demands on joint ventures will intensify, further complicating the management of the world’s largest, but strangest, co-operative enterprises.

In Shenzhen, Mr Boussac’s demanding production programme is on schedule: “At the last board [meeting] everyone was pleased to see that all the planets were aligned: Capsa, [Peugeot], Chang’an.”

Is your joint venture really necessary?

Shanghai GKN Driveshaft, a car parts venture between GKN of the UK and SAIC, dates from 1988, making it one of the oldest in the sector. Xue Jinda, its managing director, says it combines the “successful characteristics of both Chinese and western parties” – so successful that in 2009 the partners extended it for another 50 years and have just expanded its scope.

But in other industries, where joint ventures are not mandatory, they are usually shorter-lived and, in many cases, may not even be necessary.

Richard Grams, who runs the Shanghai office of Benesch, the US law firm, says very few partnerships work after year three. Often, in that time, “the company has spent as much or more time managing the relationship with the JV partners than they have pursuing the business”.

Unlike the carmakers, which operate via larger, more rigid equity joint ventures, a growing number of international companies in China are now using flexible “contractual” or “co-operative” agreements, under which more than two partners can have different shareholdings, pay-off schedules and objectives. Non-Chinese companies may also prefer to link up selectively with specific local companies for one product or activity – for instance, distribution – rather than for the entire business.

Where there are likely to be large upfront costs, or difficult negotiations with government officials, it makes sense to use a Chinese partner. But John Huang of Chinese law firm MWE China says that since 2000, more foreign groups have set up “woofies”, wholly foreign-owned enterprises, than joint ventures. As Andy Reynolds Smith, GKN’s chief executive of automotive, points out, businesses with many customers lower down the supply chain may find it easier to serve China through a wholly owned subsidiary, as GKN does in the powder metallurgy division he also oversees.

Posted by Synergistics Limited at 23:11 2 comments:

Bill Russo will present a paper titled "Towards a Green Automotive Industry" at the 2nd International Symposium on Automobile Steel 2013, to be held in Anshan, China from May 21-24. He will highlight the need for a new business model to foster cross-value chain collaborations in order to the build the green transportation ecosystem.

EVs face the same market hurdles in China as the U.S., so auto makers are turning to advanced-technology internal-combustion engines to meet emissions, fuel-economy and customer cost requirements. 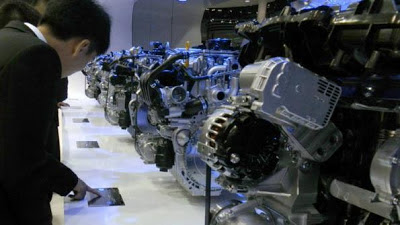