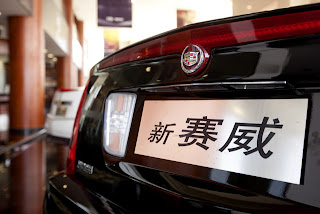 GM’s announcement at the Shanghai auto show this month that it is spending $11 billion by 2016
on new plants, products and people in China demonstrates a change in priorities.

General Motors Co. (GM), the largest carmaker in the U.S., is shifting its center of gravity to China, where it sells more cars and now invests more money.

GM’s announcement at the Shanghai auto show this month that it is spending $11 billion by 2016 on new plants, products and people in China demonstrates a change in priorities. Since its 2009 bankruptcy, GM has announced $8.5 billion of investment in the U.S., where it has a more modest assembly-plant footprint.

GM’s focus on China parallels the strategy Toyota Motor Corp. (7201) employed in the last century, when the Japanese automaker poured investment in the U.S. market, where it saw its greatest growth potential. Now, Detroit-based GM is taking the lead in the world’s largest auto market by building four new assembly plants in China to boost its factory capacity to 5 million vehicles annually, twice what it sold in the U.S. last year.

“This is what the Japanese did in the ’70s when the U.S. became their most important market,” said Rebecca Lindland, an automotive consultant with Rebel Three Media & Consultants in Cos Cob, Connecticut. “What GM is doing is really smart because it’s proactively investing in a market that, for the foreseeable future, is going to be the world’s largest.”

GM already is the No. 1 automaker in China, with 15.1 percent of the market in the first quarter on growing sales of Buick and Chevrolet models and a thriving commercial-vehicle joint venture. It’s rolling out 17 models there this year, including a renewed push to sell its Cadillac luxury line to the increasingly affluent Chinese. And it’s expanding its Chinese dealer network to 5,100, from 3,800.

“China has become the center stage in the battle for dominance of the 21st century global auto industry and GM is investing to secure its leadership position,” said Bill Russo, president of auto consultant Synergistics Ltd. in Shanghai. “GM is investing to ensure that they can differentiate themselves from the crowd by having a full product shelf and a dealer network.”

“It wouldn’t be difficult to see this flip sometime between now and 2020 for sure,” Jeff Schuster, an analyst with LMC Automotive, said of China’s potential to become GM’s profit leader.

GM’s factory build-up will give it 17 assembly plants in China, said Bob Socia, GM’s top executive in the country, exceeding the 12 it has in the U.S. GM’s dealer count in China will also surpass the 4,343 showrooms it has in its home market. GM has been selling more vehicles in China since 2010.

While China’s economic growth slowed to 7.7 percent in the first quarter, automakers still see it as an attractive market.

Asked why GM is making such a large bet on China, Socia scoffed at the idea of a gamble.
“Big bet?” he said. “We’re confident about playing here in China. We’re here for the long term and you’ve got to lead and be strong in your commitment. We’re very bullish.”

Posted by Synergistics Limited at 11:54 No comments: