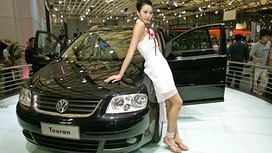 There will be no Easter holiday for many senior US and European auto executives as they abandon their families and battle jet lag at the largest car show in the world’s largest car market.

The Beijing International Automotive Exhibition, or Auto China 2014, opens on Sunday at a time when the importance of the fast-growing China market to the fortunes of multinational car companies has never been clearer.

In the first quarter of this year passenger vehicle sales in China rose 10.1 per cent to 4.9m units, including a monthly record of 1.85m units in January – a figure that exceeded the 1.8m passenger vehicles sold all of last year in India, Asia’s third-largest economy.

From mass market automakers such as GM to luxury manufacturers Daimler and Ford unit Lincoln, global success depends on success in China.

“Two, three years ago Beijing was an emerging show. Beijing is now on everyone’s calendar,” says Robert Parker, president of Lincoln China. “I told my wife I’d miss her birthday and my children that I’d miss their Easter egg hunt, but all of [Ford’s] executive and leadership team has done that.”

One executive who will not be in Beijing is Mary Barra, GM’s under fire chief executive. But far from the recall scandal that has erupted in GM’s home market, the US automaker expects to sell its one millionth vehicle in China this year during the show.

Lincoln will formally enter China’s luxury market, currently dominated by Audi, BMW and Mercedes-Benz, later this year. It is also unveiling a new car at the Beijing show – something it has never done before outside the US.

Bill Russo, founder of automotive consultancy Synergistics, predicts that popular “crossover” models – part sedan, part SUV – and technology features will garner much of the attention at Auto China 2014. “You can’t just come into the market with a car,” he says. “You have to show that you’re different from everyone else because the passenger car segment in China has become very crowded and hyper competitive.”

The competitive pressures are being felt most acutely by China’s largest domestic auto manufacturers, which some analysts feel are on the verge of a crisis.

At the end of last year, Chinese-brand passenger sedans commanded 27.5 per cent of the market, according to the China Association of Automobile Manufacturers, with German sedans in second with 24.3 per cent. Just three months later, German sedans lead with 27.1 per cent compared to 23.7 per cent for their Chinese rivals.

The collapse has triggered an intense debate among Chinese car companies and policy makers about whether shock therapy – in the form of a relaxation of the industry’s 50 per cent foreign ownership limit – is required.

Critics say the policy has encouraged passivity among large state-owned car companies, which enjoy a steady flow of profits from their joint ventures with foreign manufacturers while failing to develop own-brand vehicles that can compete domestically, let alone in Europe and the US.

China’s largest carmaker, SAIC Motor, sold just 230,000 of its own-brand cars last year, compared to the more than 4.7m units sold by its joint ventures with GM and Volkswagen. Sales for China’s “domestic big 5”, which in addition to well-regarded private-sector creations Great Wall Motor and Geely include BYD, Changan and Chery Automobile, are down 10 per cent this year.

“The dramatic decline in domestic [brand] sales so far this year has exceeded even our bearish expectations,” Bernstein Research analyst Max Warburton wrote in a recent note. Bernstein had projected the market share of Chinese brand cars would decline by 2.5 percentage points over the next two years but instead, their share fell 2.6 per cent percentage points in the first quarter of this year alone.