GM to shift overseas operations from Shanghai to Singapore 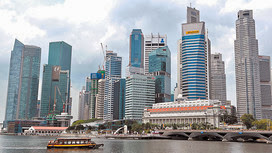 By Jeremy Grant in Singapore


General Motors will shift the bulk of its non-Chinese international operations from Shanghai to Singapore in 2014, marking a coup for the Asian city-state as it lures an increasing number of multinational companies with tax breaks and other incentives.

The Detroit-based carmaker said it would locate 120 staff in Singapore to oversee markets in the Association of Southeast Asian Nations (Asean), Africa, India, South Korea and the Middle East, as well as the European operations of Chevrolet – its best-selling brand – and Cadillac, its luxury marque.

The shift is the latest success in Singapore’s efforts to encourage multinational companies to establish regional headquarters, as it takes advantage of companies’ desire to tap into the region’s rapidly growing markets.

It also marks GM’s return to Singapore after a decade. The company moved its Asia-Pacific headquarters from Singapore – where it had been since 1993 – to Shanghai in 2004.

That coincided with the rapid emergence of China’s car market, where GM around that time started selling more units of its Buick brand than in the US.
By making the decision to shift its “consolidated international operations” (CIO) to Singapore, GM is in effect carving out a separate unit from its now much larger businesses in China and South Korea.

GM said decisions about its CIO markets would now be made “in the interest of growing our business while allowing us to focus even more intently on China”.
The company plans to retain 250 staff in Shanghai to oversee China, while 245 staff will remain in Seoul.

GM’s light vehicle sales in China have risen by an average annual rate of 27 per cent over the past five years, from 1.1m units in 2008 to almost 3m in 2012, making the country its largest market.

Its operations there include four manufacturing joint ventures, an research and development centre and four sales and service operations. “GM has achieved a very deep level of localisation in China,” said Bill Russo, a Beijing-based automotive consultant.

Stefan Jacoby, vice-president at the CIO unit, said of the shift to Singapore: “It will help us to create a renewed identity . . . and lead GM’s umbrella strategy for the region. We are looking forward to being an important part of the Singapore business community.”

The 10-nation Asean bloc, of which Singapore is a member, is home to a population of about 600m and has a combined gross domestic product just behind those of China and Japan.

Singapore ranks among one of the most business-friendly cities in the world, offering a corporate tax rate of 17 per cent, political stability, a UK-based legal system and sophisticated financial services.

Consumer goods companies, whose revenues are increasingly coming from emerging markets in Asia such as Indonesia and Vietnam, have also been expanding in Singapore.

McDonald’s, the US fast food company, recently upgraded its regional hub there as the operational base for Asia, the Middle East and Africa.

Procter & Gamble runs its global Pampers nappies business from Singapore, and is poised to open a research and development centre in March that will be the largest commercially run such facility in Singapore.

Rival Unilever, maker of Dove soap and Lipton tea, operates a global operations hub out of the city-state, where it bases its group chief operating officer.

Similarly, suppliers are also expanding in Singapore. In June, Givaudan broke ground for a new fragrance manufacturing facility and “perfumery school” in Singapore to develop scents and flavours that cater to Asian preferences.

However, some foreign companies are having increasing difficulty hiring workers with certain skills after the Singapore government this year tightened up on the influx of foreign workers.

Click here to read this article at FT.com
Posted by Synergistics Limited at 03:20 No comments:

“Bill comes to Harman with more than 25 years of automotive industry experience, including 10 years in China.  His deep knowledge of the automotive sector and extensive networks will help accelerate Harman’s plans to grow our share of the automotive markets, including infotainment, branded audio and integration services,” said Jin.   “We are confident Bill will help strengthen our relationships in the region and make significant contributions to our business.”

Mr. Russo most recently was President and CEO of Synergistics Limited, an Asia-based business development advisory firm.  From 2004 to 2008, he served as Vice President of Chrysler Group’s North East Asia business, where he directed operations for the regional markets.  While at Chrysler, he served in roles of increasing responsibility, including oversight of Product and Business Strategy.  Earlier in his career, he worked in the global services and technology divisions for IBM Corporation.

Mr. Russo has published numerous articles and is a frequently quoted expert in the major financial media on developments occurring in the global automotive industry.  He regularly speaks at major automotive industry conferences and events.

Mr. Russo will be based at Harman’s North East Asia headquarters in Shanghai, China.

HARMAN (www.HARMAN.com) designs, manufactures, and markets a wide range of infotainment and audio solutions for the automotive, consumer, and professional markets. It is a recognized world leader across its customer segments with premium brands including AKG®, Harman Kardon®, Infinity®, JBL®, Lexicon®, and Mark Levinson® and leading-edge connectivity, safety and audio technologies. The company is admired by audiophiles across multiple generations and supports leading professional entertainers and the venues where they perform. More than 25 million automobiles on the road today are equipped with HARMAN audio and infotainment systems. HARMAN has a workforce of about 14,000 people across the Americas, Europe, and Asia and reported sales of $4.3 billion for the fiscal year ended June 30, 2013.
Posted by Synergistics Limited at 19:51 No comments: