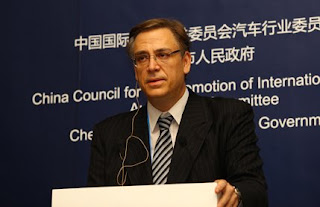 Bill Russo hosted a panel discussion at 11:45am on September 16 at the Inaugural Meeting of the Global Automotive Forum in Chengdu.
The panel topic is "The Battle of The Brands" and the panelists included:
Chinese Press Coverage of panel discussion:

SHANGHAI - Geely Automobile Holdings Co, whose parent company this month completed the biggest overseas acquisition by a Chinese automaker, boosted profit 35 percent in the first half as car sales rose.

Net income increased to 804.8 million yuan ($118.4 million) or 0.0996 yuan a share, from 595.9 million yuan, or 0.0893 yuan, a year earlier, it said in a statement to the Hong Kong stock exchange on Wednesday. Sales at the listed unit of Zhejiang Geely Automobile Co rose 55 percent to 9.24 billion yuan in the same period. Geely, maker of the Kingkong compact car, expects sales to rise 27 percent to 412,000 units this year even as growth declines in the world's largest auto market, the company said on Aug 19. Auto sales in China have been rising at a slower pace since April as inflation erodes disposable incomes and government measures to cool down the economy weaken demand.

"Geely and other domestic local car companies have to shift to building brands and establishing their reputations in order to retain customers, not just attract first-time customers," said Bill Russo, a Beijing-based senior adviser at Booz & Co. Sales growth has slowed as the government has reduced financial support for new-car buying, he said in an interview with Bloomberg Television interview on Tuesday. Geely's parent bought Sweden's Volvo Cars for $1.5 billion earlier this month, after a doubling in profit last year allowed it to expand overseas.

Car buyers are returning after high summer temperatures kept them away from dealerships in July and August, An Conghui, Geely's executive vice-president, said at a conference in Ningbo, Zhejiang province, on Aug 19. An forecasts the nation's industrywide vehicle sales to reach 16 million this year. "We usually see explosive growth in September, October, until the end of the year," he said.

Geely sold 227,200 vehicles in China during the first seven months of 2010, 34 percent more than its 169,170 deliveries a year earlier. The company's sales numbers fell 11.9 percent in July, the first decline since January 2009, Steve Man, an analyst at Samsung Securities Co Ltd, wrote in an August 11 report. July's sales "underperformed the industry by a significant margin", Man wrote, predicting Geely will lower its full-year sales target. The automaker, founded by Li Shufu, sold 325,413 vehicles in China last year, according to a filing to the Hong Kong stock exchange in January. China's auto sales growth will increase more than 10 percent next year from this year's total, Ye Shengji, assistant secretary-general of the China Association of Automobile Manufacturers, said in Ningbo.

Posted by Synergistics Limited at 22:57 No comments:

By Patti Waldmeir in Shanghai and John Reed in London
As General Motors announced the arrival of its long-awaited Chevrolet Volt plug-in electric vehicle in China, there was a feeling that the age of the electric vehicle may finally have dawned.

The Volt - which will be sold in the US from the end of this year, and in China next year - will be among the first in a wave of mass-produced electric cars powered by lithium-ion batteries from global automakers. It’s as if Henry Ford and Thomas Edison got together to design a car: posthumously. But will anyone in China buy it?

GM says the car is the world’s only “extended range” electric vehicle, taking away the postmodern malaise known as “range anxiety” (fear that your car will run out of electricity in the middle of nowhere). Volt can run 60 kilometres on its electric battery - far enough to cover most commutes, GM says - and 450 more on its petrol-powered “engine/generator”, GM says. Bill Russo, auto analyst and former head of Chrysler in China, says the Volt “has the potential to be the first true high volume electric vehicle to launch to date”.

But despite all the razzmatazz at today’s Chinese launch of the Volt, the automaker is far from sanguine about initial sales in China. Detroit will not say how much Volt will cost in China, but in the US, the price is $41,000 (less a $7,500 tax credit).

A plug-in without any plugs

In China, where the government is super-bullish about the potential for such vehicles as a way to save energy and improve the environment, the Volt will not qualify for a subsidy (at least according to current government regulations). GM officials admit candidly that only wealthy Chinese, eager to make a statement about environmental awareness, are likely to buy one.

Chinese buyers can save about $2,000 a year on petrol costs, GM says, plugging it into the wall at home at night to recharge. But many Chinese car owners live in high rise apartments without a convenient wall socket; and if they have to pay the equivalent of $41,000 for the pleasure of owning a car they need to take down the road to recharge, they may well decline.

Meanwhile Chinese carmakers are rushing to produce their own forms of electrical propulsion - aiming at price and quality levels well below the Volt. Eventually, China could become the world’s leading producer and market for electric vehicles, auto analysts believe, because of its low car-ownership rates and large battery manufacturing capacity, as well as its government’s desire to reduce pollution and improve energy efficiency.

But Li Shengmao, analyst with Shenzhen-based China Investment Consulting Corp, says that while he is optimistic about the electric vehicle market in China, he thinks the market share for such vehicles will not surpass 2 per cent in the next five years. And though Volt may be early to bid on that tiny share of the market - it will be far from the last.
Click here to view the original article at FT.com
Posted by Synergistics Limited at 05:43 No comments:

Driving a Green Revolution in the Global Auto Industry