The Truth About Cars, August 27, 2010
By Edward Niedermeyer 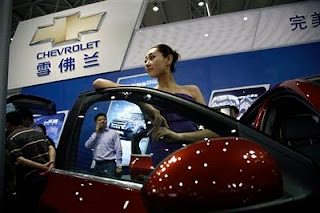 From a week deep in our “How The Hell Did We Miss That” file comes a Reuters report that shows GM considered floating its IPO on the Hong Kong Hang Seng index. GM’s interest in a Hong Kong float has obvious roots: the company is extremely well-positioned in China, where high savings rates and the prospect of steady local sales growth could have helped bring in both private investors and GM’s partner firms. But according to a Reuters source, GM rejected the idea because it would have delayed the IPO past its Thanksgiving deadline

But another issue in GM’s decision had to be the possibility of political blowback: though a smaller IPO risks a smaller payback for American taxpayers’ investment in GM, if a Chinese firm ended up with a major stake in GM, opponents could well have charged that the bailout resulted in a giveaway to foreigners (as was the case with Fiat’s takeover of Chrysler). And the role of politics in GM’s IPO planning should not be underestimated. According to a Reuters source, GM’s listing on the Toronto stock exchange is of no real value to the IPO, but

Meanwhile, the New York-Toronto listing might not prevent a major Chinese ownership stake in GM post-IPO. Hu Maoyuan, chairman of GM’s Chinese partner SAIC, tells the FT that his firm

will watch GM’s IPO closely, and think carefully if we should purchase the shares or not.

SAIC recently bought out the controlling stake in its GM Shanghai joint venture with GM, and took over GM’s Indian operations. This partnership makes SAIC the most logical foreign investor in GM, but once again politics may limit SAIC’s involvement in the offering. Bill Russo, head of the Synergistics auto consultancy in Beijing explains

I am absolutely certain they would love to have a share . . . but they do not want to upset the US about this.

On the other hand, the early days of GM’s IPO could see some US government-spurred irrational exuberance, and when reality sinks in, SAIC could well end up buying a big GM stake off the open market. After all, once the government releases its shares, it loses its ability to pick nix possible buyers for political reasons. Though GM has anti-takeover rules in its new Delaware-based corporate structure, an acquisition by a partner like SAIC would be considered friendly. And, in many ways, common sense. Though GM’s IPO may not immediately lead to a Chinese ownership stake, greater Chinese ownership of the bailed-out firm seems extremely likely over the medium-to-long term.

Click here to view the original posting on thetruthaboutcars.com

A GlobalAutoIndustry.com Online Seminar to assist you with doing business in or with China.

Topics to be covered:
Taken collectively, it is clear these trends signal a shift in the global center of gravity towards the east. The dramatic shifts that have occurred over the past year in the structure and brand portfolios of the vehicle manufacturers are simply the early stages of a process of asset reallocation and global realignment that will unfold over many years. These trends are reshaping the brands, products and global footprint of those who hope to prosper in the 21st century automotive industry. Indeed, China has taken center stage in the battle for global auto industry dominance.

Who Should Attend
This Online Seminar is for foreign-based companies doing business in or with China.

Please note:
Please note that all events are for automotive suppliers and OEMs only. Select Global Expert guests may also attend at our discretion. If you have any questions whether you or your company is eligible, pleasecontact us.