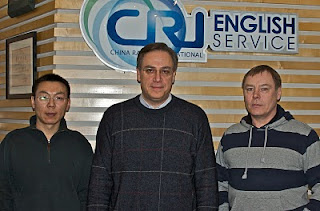 As embattled Japanese auto giant Toyota launched a broad counter-attack on Monday aimed at refuting research that suggests electronics may be at the heart of runaway acceleration problems that have led the automaker to recall more than 8 million vehicles, there were reports of a runaway Prius on a California highway. The company just doesn’t seem able to catch a break – but do they deserve one?

Click here for a link to the broadcast at CRIEnglish.com

Posted by Synergistics Limited at 06:43 No comments:

Wang Fengying peeks into the room where the video cameras are waiting for her – and then runs down the hall, trailing public relations people, in search of a place to change her dress.

Ms Wang, 40, is the chief executive of the first Chinese car company to win approval to sell its cars throughout the European Union.

As the centre of gravity of the global car industry shifts to the East – with the emergence of China last year as the world’s largest auto market – this is a woman to be reckoned with in an industry dominated by men.

Her company, Great Wall Motor Company, is a leading seller of that quintessential boy’s toy, the sport utility ve

But Great Wall aims to be more than a peddler of off-road status symbols. It is jockeying for position as the next Hyundai – an Asian exporter of good cars at cheap prices.

In 2008, Great Wall sold nearly half its vehicles overseas (30 per cent last year due to the financial crisis). Ms Wang aims to sell 600,000 vehicles overseas by 2015, out of total forecast production of 1.8m; and she has already expanded beyond SUVs to small cars.

The Western auto industry, its confidence shaken by the global economic crisis, is watching companies such as Great Wall very closely.

Which Chinese company will be the first to break into the top ranks of global carmakers?

Geely, the independent car company that will shortly buy Volvo from Ford?BYD, the Warren Buffett-backed carmaker that plans to export electric cars to the US this year? SAIC, the state-owned powerhouse? Or could it be Great Wall, which is quietly laying the groundwork for a push into Europe?

Ms Wang advocates the notion that before you sell cars, you have to prove they are worth buying. So she has focused on the lengthy process of getting the EU’s prestigious Whole Vehicle Type approval for four Great Wall models, which permits sales throughout the internal market.

However, she does not think that even such a badge of quality will overcome consumer suspicion of brand China.

“Many consumers around the world have doubts about products made in China,” she says, acknowledging that it scarcely helps to come from a country famous for selling poisoned baby milk.

Such candour endears her to business partners and foreign rivals.

Suppliers say she pays her bills on time (a simple virtue not shared by some competitors), while industry insiders value her lack of bluster.

Great Wall “aims before they fire the gun”, says Bill Russo, head of auto consultancy Synergistics and former head of Chrysler in China.

“Many Chinese auto companies dream beyond their capabilities and there is something to be said for that ... But Great Wall is different: if they are talking about it, they have already done it.”

Ms Wang, who is a delegate at this week’s National People’s Congress in Beijing, says the government must help overcome China’s brand handicap. It must set minimum standards for the “made in China” label. No longer a badge of infamy, made in China must become synonymous with quality.

“People know that Switzerland is famous for its watch industry and Japan is known for manufacturing. China ought to start focusing on the brand building of Chinese automakers,” she says. However, Ms Wang has no illusions that it will be quick or easy to establish her brand in Europe. “Chinese auto brands are not established in those areas. For a product without branding, progress will be slow,” she says.

At a time when many Chinese business people display self-confidence that the country has emerged almost unscathed from the economic crisis, Ms Wang is not predicting that China will take over the automotive world anytime soon.

They may not take as long as Toyota did – and they will study the Japanese carmaker’s mistakes in the current recall crisis – but building a global automotive powerhouse will take “longer than the outside world thinks”, she says.

Posted by Synergistics Limited at 05:48 No comments: