Auto Sales Slow Down in China and India 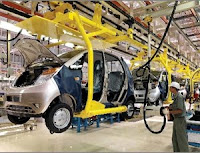 Domestic auto markets in China and India may no longer be able to repeat last year’s impressive sales records, as auto sales growth in both countries’ continued sliding in May. Experts say the market downturn is caused by a combination of long-term and short-term issues, including the impact of Japan’s earthquake and tsunami, soaring fuel prices, and inflationary pressure.

Statistics released by the Society of Indian Automobile Manufactures (SIAM) on June 9 shows that, while April-to-May auto sales records grew by 16.34 percent from a year earlier, the year-on-year growth in May alone slowed to 13.4 percent.

In China, according to statistics by the China Association of Automobile Manufacturers, the booming Chinese automobile sales market has been witnessing rare decreases since April. Both production and sales have decreased by 12.14 percent and 10.9 percent respectively from a month earlier, and 4.89 percent and 3.98 percent respectively from a year earlier.

Both countries’ monetary tightening policies could bring down people’s passion for consumption and discourage production in enterprises. In India, the latest consumer price index (CPI) released in April increased by 9.41 percent, a four-month high from the beginning of the year. This increase is a signal that the government’s tightening measures may not end any time soon (even after nine interest rate raises since last year) and car buyers still need to pay back high interest for their car loans.

China is also faced with the challenge of a CPI that still stands high and is predicted to repeat the 32-month-high rate of 5.4 percent as it did in March. In order to curb inflation, the People’s Bank of China has raised bank interest rates four times since last year, worrying a variety of manufacturers who seek fast expansion.

Nowadays in China and India, the burden of affording fuel is becoming greater than the burden of affording a car. Led by global crude oil price growth, fuel prices have surged in both economies. Gasoline prices in India rose nearly 9 percent last month, and China has increased both gasoline and diesel prices twice this year. During China’s latest price hike in April, gasoline rates grew by 5.6 percent and diesel rates increased by 4.9 percent.

While the consequence of high inflationary pressure had been foreseen, Japan’s earthquake and ensuing tsunami were a shock to both countries’ auto markets. Production declined because of a temporary supply shortage. In addition, buyers who looked to purchase Japanese cars may have hesitated as prices of Japanese cars stayed firm and have even increased due to reduced supply and production. According to a recent report in the Guangzhou Daily, January-May Honda sales in China dropped sharply by 8.9 percent from a year earlier, and Toyota sales also suffered a year-on-year 2.1 percent decrease over the same period.

Another domestic policy may have also driven the Chinese auto market down. Since the end of last year, China has removed small-car tax incentives, which might have impacted lower-end car buyers’ purchase plans.

However, some experts in business consulting companies still believe China’s consumption power will help maintain stable growth in the country’s auto sales market. Ivo Naumann, head of AlixPartners China, predicted a 10 percent to 15 percent annual growth in China’s light vehicle sales despite the current downturn, thanks to the support of the rapidly expanding wealthy consumer base.

Bill Russo, head of Synergistics auto consultancy, said the current car market performance in China can still be regarded as “strong,” as it maintains relatively stable given the present headwinds.

Compared to the consultants’ confidence in the Chinese market, forecasts by Indian analysts on India’s auto sale market tend to be more conservative. The SIAM worries it would be hard for India’s domestic auto sales market to hit full-year targets based on its current performance, predicting the growth rate of the year will be halved compared to last year, from 30 percent to 15 percent.

Jatlin Chawla, an automotive analyst at IIFL in Mumbai, says while he expects a slowdown in India’s car sales will continue for another three to four months, the customarily busy festive season in India – starting in September – is hoped to revive the country’s auto sales and is very critical to carmakers.

Posted by Synergistics Limited at 18:55