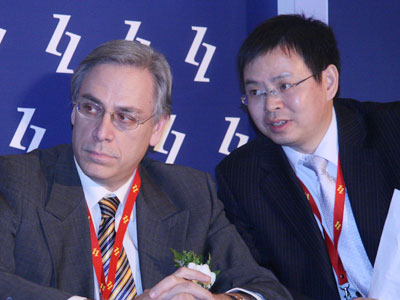 Click here to view the original article on sina.com

Posted by Synergistics Limited at 17:52 No comments:

The dramatic rise of China’s automotive industry, in terms of both consumer demand and production supply, is truly unprecedented in the history of the industrialized world. No country has risen from a nearly standing start to the size and scale that China has achieved in such a compressed time frame. It was, after all, just 17 years ago when Deng Xiaoping made his now-famous visit to Shenzhen where he announced the creation of Special Economic Zones and thereby sparked China’s wave of economic momentum. The logical question to ask is whether this momentum is sustainable, particularly as it relates to the most iconic of consumer goods: the automobile.

The last of the Eight Overarching China Automotive Trends That Are Revolutionizing the Auto Industry addresses the underlying socio-demographic forces that are driving the recent economic developments in China: and why there is every reason to believe that, barring unforeseen geo-political instability, China has a very bright automotive future.

Since the early 1990s, China’s economic development has been centered the metropolitan areas of China’s coastal regions and surrounding areas. Shanghai, Beijing, Guangzhou and Shenzhen are typically identified as “Tier 1” cities with the highest income, largest population base and largest GDP.

This is followed by a group of 21 “Tier 2” cities. Chongqing is the largest municipality with a total population of 32 million residents, however only 6 million are considered urban. Other Tier 2 cities include Dongguan, Nanjing, Wuhan, Hangzhou, Shenyang, and Harbin. Smaller cities such as Zongshan, Xiamen, Changzhou and Zhuhai are also included because of their higher per capita GDP.

A fourth-tier “next wave” group of cities is also beginning to emerge as economic development begins in earnest in yet another group of mostly interior Chinese cities. And finally “rural” and “remote” population groups complete the classification of the Chinese population of over 1.3 billion people.

In fact, the emergence of this multi-tiered structure is a result of the economic development path that was initiated by Deng Xiaoping. Prior to this, over its history of nearly 5000 years, China had been a rural and agricultural economy. In the space of just few decades, a significant percentage of the population of our planet has migrated to the cities of “new China”, and in the process these people are moving from poverty to prosperity.

At the start of the reform era, 82% of China’s population was considered rural. By 1990, this percentage had declined to 74%. By 2000, the percentage was 64%. In 2008 this had further declined to 55%, or approximately 720 million people. Clearly, these shifts represent a migration of population towards the areas of economic development and concentration of wealth. The creation of new wealth has had a profound impact on the development of the cities across all of the previously described “tiers”. This has also impacted the development of rural areas as urban wealth has a positive impact on extended family members who remain in the rural population.

While China possesses a migrant workforce of over 200 million people, there is no mistaking the trend of permanent migration of rural population to existing urban areas. Looking forward, it is expected that nearly two-thirds of China’s population will be in urban areas by 2020. This represents a whopping rise in urban population of nearly 200 million people in just over 10 years. Essentially, China creates the population-equivalent of a city of between 1.5 – 2 million people each month! It is no wonder why China’s cities are continually under construction.

A growing middle-class is emerging in these urban areas. If we define “middle class” as people with annual income greater than 150,000 RMB ($22,000 US), this number has increased from 1.5 million to 4.8 million individuals from 2000 through 2008. This number is expected to increase to over 40.3 million individuals by 2020.

The China government estimates that there are over 45 million families that have reached the threshold of 30,000 RMB ($4,400 US) of expendable money, which is considered a threshold for entry into the car buying population. Urban wealth accumulation is undoubtedly fueling the growth in automotive sales. The fact that 85% of all vehicles are sold to urban residents is a clear sign of the relationship.

The growth of a more affluent urban middle class, combined with a generation that has lived under a one-child policy is creating yet another consequence: wealth accumulation for an increasing number of middle and older age groups. By 2020, it is estimated that China’s population will grow by approximately 110 million, yet the number of individuals over 45 will increase by 118 million. It is also expected that the population of individuals between 25 – 44 will shrink by 22 million. This has significant implications for product preference, as middle-aged and older consumers tend to seek more luxurious products.

The statistics on urbanization, income growth and population demographics point to very favorable conditions for the continued robust growth of the automotive market. However, many people question whether China has sufficient infrastructure to handle the increased volume of cars and whether resource constraints (people, energy, investment capital) may eventually limit the growth of the market. While these are all legitimate issues, it is useful to first view China’s automotive development in contrast with that of other developed countries.

A commonly used benchmark to compare the development of the car industry across markets is cars per 1,000 of population. On this measure, China is tied with Belize in 107th place at 10 cars per 1,000 (source: www.nationmaster.com). The US leads with 765 cars per 1000. Of course, the US market may not be a fair comparison as it is a mature market with a historically large car population. A fairer comparison would be a market like Mexico with 138, Russia with 124, and Brazil with 81. Clearly, there appears to be upside growth potential for China.

Forecasts of the China market over the next decade anticipate that the passenger vehicle population will grow from 100 – 200%. Global Insight’s base forecast anticipates growth in the passenger vehicle population from 10 – 153 million units from 2005 to 2030. The high forecast places the number at 327 million units. The bottom line here is that it is hard to be pessimistic China’s future automotive prospects.

The Growth of the Lower-Tier Cities

A key reason for optimism is the anticipated development of China’s lower tier cities. While China’s economic revolution has been clustered around the Tier 1 and 2 cities, it is important to understand the real impact that the lower-tier cities will have on the future development of the market.Interestingly, most multi-national corporations had focused their businesses and sales activities around the Tier 1 and Tier 2 cities. For example, Toyota has derived 20% of its sales in 2009 from Guangdong province, and 5 of China’s 31 provinces account for 49% of their sales. Similarly, VW generates 40% of its sales from its top 5 provinces.

The Chinese local manufacturers, by contrast, are more focused on the lower tier cities. Local brands offer a better fit to the purchasing power of the consumers residing in these lower tier cities. Driven by the onset of the global financial crisis, the Automotive Industry Stimulus Plan published in early 2009 took specific measures designed to spark the growth of consumer demand in these lower income cities. Measures including the reduction of sales tax for cars below 1.6L engine displacement, along with subsidies for new minibus or light truck sales for rural residents have accelerated the auto market expansion in these markets, helping to boost the performance of the Chinese local manufacturers. Recognizing this, multi-national companies are placing more focus on the development products suited for the tastes and preferences of consumers in these lower tier markets.

Lower tier cities are capturing an increasing share of the market and are experiencing the highest year-over-year growth. Recent data from China’s National Statistics Bureau highlight this trend:

As a result, we can expect to see even more intense competition among the foreign and domestic brand vehicle manufacturers as they attempt to capture this growth opportunity (see Trend 6: Hyper-competition Across The China Auto Market Segments). As this is happening, the local manufacturers are striving to upgrade their brands and product portfolios to meet the more upscale image aspirations of Chinese consumers (see Trend 7: Local Vehicle Manufacturer's Push To Build Brand Equity).

Clearly any growth strategy in China requires an understanding of the rapidly changing demographics and a plan to capture the growth in China’s lower tier cities.

This brings us to the conclusion of our in-depth look into the Eight Overarching China Automotive Trends That Are Revolutionizing the Auto Industry, which are summarized here:

Taken collectively, it is clear that these trends signal a shift in the global center of gravity towards the east. The dramatic shifts that have occurred over the past year in the structure and brand portfolios of the vehicle manufacturers are simply the early stages of a process of asset reallocation and global realignment that will unfold over many years. These trends are reshaping the brands, products and global footprint of those who hope to prosper in the 21st century automotive industry.

Click here to read the article posted on GLG News