Posted by Synergistics Limited at 18:02 No comments: Links to this post 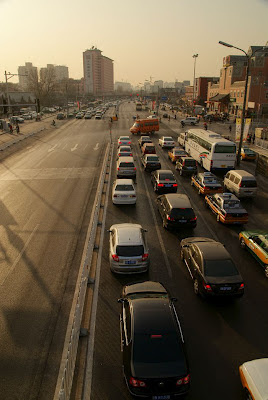 While Jaguar Land Rover and Chery Automobile stand to gain from their partnership, they must realize that just having a joint venture is not enough to succeed in the Chinese market


As you stroll down the busy streets of Beijing, it is hard not to notice the array of cars whizzing past. From frugal QQs to flashy Audi saloons, it seems every car company wants its share of the world’s largest auto market. Domestic automakers seem to have the budget market sewn up, but some of the world’s luxury marques also see profits in China. The country is now Bentley’s largest market – first quarter 2012 sales in the region are up by a whopping 84.9%. Even supercar maker Lamborghini has courted the Chinese market with the multi-million RMB limited edition Murcielago LP670-4 SV.

The newest entrant on the scene is Jaguar Land Rover (JLR) which is looking to take advantage of its decidedly British luxury branding by signing a joint venture (JV) agreement with China’s Chery Automobile. While JLR wants to build its brand in China, perhaps Chery is hoping to gain some much-needed luxury allure – maybe even hoping to follow in the footsteps of the Land Rover Evoque with Victoria Beckham-designed interiors for its future product lines.

The JLR-Chery JV has been in the pipeline for several months and comes close on the heels of Geely’s takeover of Volvo and JVs between Chinese and foreign automakers like Mercedes Benz, Volkswagen and Audi. The idea is to manufacture JLR- and JV-branded vehicles, establish a research and development facility, manufacture engines and sell vehicles produced by the JV company.

In a joint statement, JLR CEO Ralf Speth and Chairman and CEO of Chery Automobile Company Ltd Yin Tongyao said: “Demand for Jaguar and Land Rover vehicles continues to increase significantly in China and we believe that JLR and Chery can jointly realize the potential of these iconic brands in the world’s largest car market.” No further details were divulged, but sources suggest that the deal is worth around RMB 17.5 billion. There is an initial planned production capacity of 50,000 units, to be staffed by 5,000 people.

It is pretty clear that JLR wants to develop its brand within China, which is already its fastest-growing market for saloons and SUVs. In the past JLR used to import vehicles, but to become a major force in China, local production is the only option and that cannot happen without a JV.

Chery appears to be looking for a way to move up the automotive value chain. The hope is that some of JLR’s luxury appeal, quality production and proven technologies will benefit Chery’s branding and product development in the future as it tries to establish itself as a big player in the domestic automobile market.

Professor Teng Bingsheng, Associate Professor of Strategic Management at CKGSB, has been studying strategic alliances for a while now. “Chery is one of the only remaining Chinese state-owned car companies that have not previously agreed (to) a joint venture,” he says. “The trend has been pretty clear: without a big-brand foreign partner and the accompanying expertise and technology they can provide, it is hard for any Chinese automakers to really make big strides.”

With demand and supply reaching equilibrium in China, companies like Chery require the increased competitive advantages that are potentially available through a JV with an established foreign auto brand.

“Chery has been able to grow on its own over the last 10 to 15 years, as its position in the lower end of the car market, which has grown faster than the higher end market, has allowed it to become quite successful,” says Professor Teng. However, the market is now reaching an equilibrium. As growth slows and competition becomes stiffer, companies like Chery are going to find it harder to compete.

Despite its obvious advantages for JLR and Chery, there are a number of issues that still need to be resolved. Most notably, although the deal has been announced, approval from Chinese regulators is still required. This means it could be a year or more before any action can be taken.

But there’s a bigger issue at play here. China’s National Development and Reform Commission (NDRC) has been reluctant in the last couple of years to grant further approvals for automotive JVs, with a growing sense that the market is already overinvested and cannot bear further deals.

“Concerns regarding approval are realistic given that even after Geely’s outright purchase of Volvo two years ago, they have not yet received approval to begin production within China, says Professor Teng.

Bill Russo, a China auto industry expert and President and Founder of automotive consulting firm Synergistics, adds, “Geely found out earlier this year that to produce vehicles in the new facilities that they intend to build, the two parties – Volvo and Geely – need to form their own JV. This is somewhat unusual given that Geely already owns Volvo, but it is consistent with how China has previously allowed foreign-branded auto companies to access the market.”

Although Geely’s takeover of Volvo is very different from the JLR-Chery JV, the problems of approval remain. As Chery is state-owned, it does have an advantage over Geely and that might speed up the process to a degree.

Chery may see JLR as an ideal partner for its future plans, but question marks still remain regarding how a luxury car manufacturer and a value brand such as Chery can really cooperate for mutual benefit – particularly given Chery’s lack of experience in working within such a JV. There is a realization that even if Chery believes they are fully capable of handling this – without adequate government and industry support – the deal could fall through. China’s diesel car king Hawtai is a good example of this – its JV with Hyundai came apart in 2010 and its rescue bid for Saab fell through.

“This may be Chery’s first ‘marriage’ in terms of a JV with a foreign automaker, but it isn’t their first ‘date’ by any means. Chery has tried to do deals with Fiat and Chrysler before, but couldn’t quite make it. Their intentions have been clear for a while,” says Russo.

In each of these cases, Chery was not to blame for the failure. The Fiat deal did not receive approval, and in the case of Chrysler, it was the restructuring of the company during the US auto crisis that caused this deal to fizzle out, despite a promising start.

Whilst Chery has yet to prove itself in terms of working with a foreign partner, Russo does believe that the companies can overcome challenges associated with being from different market segments, and that this could even prove beneficial.

“You want a company that has already proven itself, and Chery has proven that it can build a large automotive business. Furthermore, JLR has many of the capabilities Chery does not yet possess, particularly in terms of making high-end products.” says Russo.

Both of these companies seem to have complementary abilities, and now it is really down to the commitment of the parties to make this ‘marriage’ work.

While there are some clear advantages for JLR as they look to develop within China, it could be said that they are entering the market too late. Other brands like Audi and Mercedes Benz are already well-established and the overall car market in China is beginning to slow somewhat. Vehicle sales in China rose a scant 2.5% in 2011, the slowest growth in over a decade. The market is becoming saturated, and JLR will have to act quickly to gain any ground.

“They will need to catch up quickly…. Other brands are already embedded in the luxury segment, so to be successful JLR will need to be creative in the way that they tackle the market,” says Professor Teng.

Although Russo believes that China’s auto market is overinvested in terms of the number of companies in the market, he still sees the potential for JLR’s Land Rover products, particularly as the SUV segment is one of the fastest growing in the country.

“In terms of the chronology of events, JLR is entering the market late. However, given the stage of market development, particularly in terms of premium SUVs, there are very few established, localized premium makers producing premium SUVs in China,” he says.

Not an Instant Solution

“Joint ventures will potentially help Chinese companies to look beyond the domestic market, but it is a long shot and will take significant time,” says Professor Teng. For example, SAIC, China’s largest automaker by volume, has had JVs in place for over 20 years, but it has taken the purchase and resurrection of the MG brand in the UK for it to see any traction outside of the domestic market. Whilst SAIC saw sales top nearly 4 million in China in 2011, MG Motor UK started 2012 with 107 sales in January in the UK, 103 in February and a new record of 236 cars sold in March – the best one-month performance since the company was formed in 2009. This is something to build upon certainly, but shows how slow the progress can be.

Although JVs can be mutually beneficial, they are not a fast-track to success in China’s auto market, or an automatic gateway to international markets for domestic brands. Right now it is still all about the domestic market and its maturation from increased volumes to greater product differentiation and sophistication. This is a challenge for both partners in any JV, but with the right cooperation and mix of expertise, there is still room for growth in the market.

http://knowledge.ckgsb.edu.cn/detail/two-to-tango
Posted by Synergistics Limited at 16:34 No comments: Links to this post